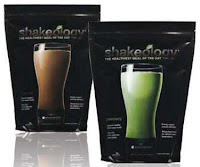 Lately, I've made mention about my use of the nutritional product, Shakeology, and some folks have been questioning if I've abandoned the RKC ranks and gone P90X on them. So let me set the record straight... definitively... once and for all.

I heard about Shakeology before there WAS a Shakeology directly from the mouth of its inventor - Isabelle Brousseau. The wife of Beachbody CEO, Carl Daikeler, Ms. Brousseau is a singularly talented coach and highly educated researcher. She's spent years studying the advanced principles of elite human performance from authorities around the world, and I was honored to have the chance to share Pavel Tsatsouline's Hardstyle RKC kettlebell training method privately with her. As adept student, she was on the fast-track to preparing for her RKC instructor certification when she decided to take time off upon learning she was expecting her first child.

During the times I spent training her, Isabelle and I spoke about Chinese herbal medicine, and she mentioned she was researching ways of combining all-natural foods with the highest possible nutrient values into a meal-replacement shake designed for athletes and people on-the-go. When she mentioned wanting to put in high quality Ayurvedic herbs, Chinese herbs, antioxidant rich fruits and vegetables, prebiotics, and a host of other vitamins and minerals, my initial reaction was.... "Yeah, right!"

My doubts were not unfounded.

Having spent years studying (and consuming) Chinese herbal medicines, I had a familiarity with a good deal of what Brousseau was talking about. The ingredients she'd mentioned sounded like a wishlist that only insiders would know of and only the filthy rich and well-connected could afford. On top of that, the taste of such a mixture, I surmised, would probably make even the least sensitive tasters wretch with disgust. To make a mixture that would contain the type of ingredients she mentioned, be stable enough to ship & store, and not taste like the bottom skim of a Los Angeles sewer was a pipe dream as far as I was concerned. So I filed the conversation away in my mental round file.

Not only did Shakeology have EXACTLY the type of ingredients that Isabelle had mentioned during our training sessions, but it had MORE!

- MSM: one of the most popular supplements for joint health

- Chia: the Mayan super-seed with more calcium than whole milk, more Omega 3 & 6 than salmon, and more protein than kidney beans

- THREE different proprietary blends and some vitamins & minerals that actually exceeded the US RDA.

This stuff looked like it was fit for a king for sure. So I was damn curious to put it to the final 2 tests - taste & performance. I wanted to know if it smelled or tasted anything like what I thought it would and was damn curious if it'd make a difference for my high-velocity, high-output, high-mileage lifestyle.

A little background... I'm a caffeine junky by virtue of workaholism. Ever since discovering the "joy" of all-nighter homework sessions in high-school, I became keenly aware of the value of being able to work harder and sacrifice sleep. So when the No-Doz, Vivarin, & Mountain Dew lifestyle needed an adult turn after I'd graduated & started writing, teaching, treating patients, travelling, training, and trying to spend time with my family, I dove hip deep into energy drinks like Red Bull & Monster and caffeinated energy bars like Pit Bull. When I speak well about a nutritional product, it's for one reason - it helps me get my work done while keeping me healthy.

Another bit of background... I'm a glutton. I love food, especially food that tastes good. I never met a filet mignon that I didn't like, and never met one that I didn't like better wrapped in bacon, with a side of bacon-wrapped scallops, and mashed potatoes... topped with bacon. If it doesn't taste good, I don't care how good it is for me. I'll STILL probably not like it well enough to be disciplined about taking it.

The Shakeology greenberry bag that Carl gave me turned my ball of preconceived notions and stood it on its ear. From the moment I opened the bag, the scent was wonderful, like a dessert that you're eager to tear into. So I dumped some ice & water into the blender and dropped a scoop of the bright green powder in with it. I didn't add juice or other fruits because I wanted to know exactly how this taste by itself, unadulterated. The next sound I heard after taking my first sip was, "Yum!" It passed the taste test.

Next was the travel test. I wanted to see how it kept me going while travelling, so instead of my usual chain-drinking habit of Monster or Red Bull, I tried a shake or two during the day, usually with one in the morning. I brought Shakeology with me to New York, New Mexico, & most recently to Australia to see how I'd do with it, and the results were remarkable. I had sustained, stable energy, but without the jitters, aggression, and hard drops aftewards. When I travel, I travel to teach, and I have to be up, energetic, strong, and focused. My days here in LA revolve around teaching, training, treating patients, and trying to steal moments with my family. So if something doesn't give me the energy to do what I need, I can't waste my precious time or hard earned money with it. Shakeology has proven itself to be able to give me all of that on multiple occasions, both while travelling and here in Los Angeles.

You can draw your own conclusions about any product you want, but I'm sharing my experiences with Shakeology here openly. And if you think I'm endorsing it only for financial gain, you couldn't be more wrong. I signed up as a "coach" so I could buy the product for myself! If you want to try it, you know where to find it, and get ready to be surprised how little such high quality nutrition costs!
Posted by Unknown at 10:11 PM

I am so impressed by your write up. I currently am a Beachbody Coach and also love my shakeology. It is a wonderful product. Amy Jurrens RKC contacted me to let me know that you had wrote this blog and where a faithful user. I to have learned to do some KB WO with Amy as my instructor and I love it along with all of my Workouts from Beach Body. Thank you for sharing your knowlege of such a great product. I also picked up some great tips. Thanks again!!! Julie

Shakeology arn't sold in the country I live in, are they very popular in the USA ? I've yet to see any advertising for them.

Julie, Prof. Jurrens is one of the best kettlebell instructors you could ask for. You really lucked out with her.

'Roids, Shakeology is only sold in the USA right now from what I've been told. I believe you can order it and have it shipped overseas, but there are no foreign distributors yet. This is something that is being worked on diligently right now.

Dr. Cheng. I was excited to see you wrote about Shakeology. Being a doctor & way into fitness, you see the value of what it is that Shakeology offers to people. I was going to link to Carl Daikeler's post, but I've got to link back to yours! Thanks for writing this post.

I had a very similar story to yours. I was looking for more energy so I could cut caffiene out of the diet, since it's counter productive to weightloss!!

I too needed to be a testimonial myself - the toughest critique to health related drinks (especially one's that are tied to a business!). I saw people adding all sorts of things to their shakeology - but I wanted to know how it would taste "as is".

I am on the chocolate shake and LOVE it. And because I drink it at breakfast, I never forget to give my body the nutrition it now craves. AND a side note, I lost 7 lbs in 2 weeks from it!

I couldn't be more happy! Glad to see you're enjoying it as well.

Very cool write up from an non beachbody \ P90X'er. Ive been using Beachbody Products as well as Kettlebells to prepare for an event in September.

p.s. hope you don't mind but I posted a link to your blog from mine.

Mark, do you know for sure if beachbody really are working on being able to send shakeology overseas? I am in new zealand & you wouldn't believe how desperately i want to try it! lol :) I have asked BB customer service but they kind of avoided my question. I really hope they start selling internationally that would be so so so awesome. Thanks for your article!

Timothy, Kimberly, & Robert, I'm glad that you found value in my post & more importantly in Shakeology. :)

Sian, exporting food products is a MAJOR undertaking as far as the logistics behind it. Many countries make it rather difficult to conduct commercial sales of food products across international lines. So while Beachbody is working on making Shakeology available overseas & outside of the USA, I can only suggest that you keep in touch with Beachbody customer service. I have already spoken personally to CEO Carl Daikeler on this issue, as many of my friends, colleagues, students, and followers are outside of the US & wish to become regular users of Shakeology.

Wow that's awesome you've spoken to Carl about it, & great to know it's on their radar :) I talked to customer service again & they said that if I had any friends in America that would order Shakeology for me, that it would be possible for them to do that & then post it on. So that might be an option for your overseas friends.. now I just need to find someone that will do it hehe :)

I was very impressed when I found out you were a RKC instructor. As a coach I first saw you in Shakeology video. I live in Las Vegas and I am looking to get back into kettlebell Training. I haven't done it since I was in the AF. Any god trainers that you know of out here? Do you teach in LA?