If you wonder why we're moving from the Beach...

This is just ONE of the reasons why we're moving our KBLA Sunday class away from the beach. Don't get me wrong... I love Santa Monica, and I love hanging out at the beach, but there's something to be said for limited exposure!

The National Resources Defense Council has tested for the bacteria found in human and animal waste at 75 percent of the state's public beaches from April through October 2007.

The non-profit organization found unhealthful bacteria levels 7 percent of the time. That's better than last year, when 12 percent of tests turned up bacteria like coliform or enterococcus.

The state's worst offender is Avalon on Santa Catalina Island, and on the mainland, Santa Monica beach is filthiest.

Clean beaches were found in Laguna Beach, Bolsa Chica State Beach and Huntington Beach.
Posted by Unknown at 6:44 AM 2 comments 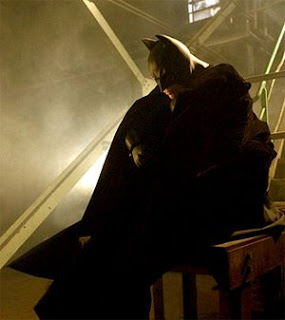 A couple of weeks ago, I had an interesting conversation with some of my closest friends, posing the question: "If you had the choice, who would you be - Superman or Batman?"

To much friendly ridicule, I was the only one who chose Batman. So when I turned on the tube at the end of today's workday and saw a History Channel special on the psychology of Batman, I had to watch it.

Here's the summary with a few quotes that I paraphrased...

Batman operates within a moral code that's incredibly strict. In spite of loneliness, in spite of bereavement, in spite of some factors that would be quite unbalancing for anyone else, Batman exercises incredible self-regulation. When faced with the option of bending the rules and getting away with inaction or cowardice, he makes the choice to uphold his ideal of protecting innocent people from criminal acts. He does not compromise his principles.

It's easy to make any choice when there are no consequences for you. For a hero, those choices are monumental. And in an "ordered" society where the law is open to interpretation, someone with a rock-solid dedication to justice can be seen as a vigilante by those who are appointed by society to protect them, but are not solidly committed to the same ideals.

The villains define the hero. The heroes are the ones who often believe, "Something bad happened to me, and I'm going to make sure that it doesn't happen to anyone else."

The last of the human freedoms is the attitude one adopts towards life. The importance of choice is the incredible power when one consistently chooses the same choice time and time again, to champion good and to affirm life.

His extraordinary capacity for self-discipline is Batman's real "superpower". He made the choice to take an enormous tragedy and shaped his life in a way that was totally dedicated to the service of humanity. He shows us the greatness of what humans can be and provides a hope that all of us need.

This is why I chose Batman. This is life in Hard Style.
Posted by Unknown at 10:26 PM 2 comments

Relocating for the morning!

If you're coming to my Sunday morning class, we're relocating for tomorrow only due to a conflicting event at the beach.

We'll be starting at 7am at Clover Park in Santa Monica (2600 Ocean Park Blvd, 90405). See you there in the northeast corner of the park, right by the parking lot off of Ocean Park Blvd!!! Tell your friends!

ADDENDUM (from the Sheraton Bloomington Hotel)...

The flight got cancelled, so Anton Summers RKC will be teaching in my stead. I'll be looking forward to seeing you all the following Sunday! Train hard... the RKC's in days! If you need me, drop an e-mail.
Posted by Unknown at 6:40 PM 0 comments

It seems that there are a lot of folks (RKCs of almost all ranks included) that don't quite grasp the importance of the Party Line in the RKC community.

For the RKC consortium, that means that there is a STANDARD teaching method that is recognized as acceptable for users and Level 1 RKC instructors. And since the RKC is THE GOLD STANDARD in kettlebell instruction, RKCs should be able to both teach AND demonstrate all of the Level 1 techniques within the parameters of acceptable quality. We need to teach BY THE BOOK. What book? The RKC Instructors' Manual. Yes, the huge ZIP file that Dennis takes the time to put together and email out to all of the RKCs who are coming to assist and all of the Team Leaders that are there to teach.

Now some people in the RKC community have taken it upon themselves to backtalk their commanding officers, not only questioning their judgement, but doing so in a less-than-tactful manner. To use a martial arts analogy, it's as if a relatively new blue belt suddenly decides that his bollocks are too big for his belt and he decides to go & pick a fight with a bunch of brown and black belts. The smackdown is comin'.

Here's what's up... The RKC system has always been and will always be an organic, growing, and evolving system. When I went through it, there were all kinds of exercises taught: Deadlift, Swing, Turkish Get-Up, Clean, Press, Front Squat, Deck Squat, and Snatch, including the windmill.

In the times that I've been back to St. Paul, San Jose, Copenhagen, and Budapest, I can't tell you how much variation and evolution I've seen in these exercises and their teaching methods, but the core 6 have always been the same - Swing, TGU, Clean, Press, Front Squat, & Snatch.

So as far as I can tell, there's NO reason for anyone certified as an RKC within the last 2 years (which is the time frame for an RKC to renew his/her certification by assisting or retesting at an RKC event) to be anything less than competent with those 6 basic lifts.

But reality speaks otherwise... a considerable number of RKCs who come to serve as assistants and a CONSIDERABLE number of RKC II candidates at the recent RKC II cert event needed a MAJOR review of the basic lifts.... SO MUCH SO that many of the Master & Senior instructors were fuming at the abysmal level of performance.

I'm far from perfect, but I'm striving for it all the time. I've had to overcome prior injuries, current injuries, lack of sleep, overwork, family issues, whatever, just to get a workout in here or there. But there's a minimum acceptable level when it comes to the 6 RKC basics, and those 6 exercises are what I focus on MOST in my own training; not the bent press, not the LCCJ, not the bottoms-up stupid human tricks. In fact, most of my training centers around Pavel's Program Minimum. And when I really want to dial in improvement, I focus on my Swing, especially the 1-handed swing since that is the foundation for all the other 1-handed techniques, like the Clean & Snatch. The most advanced of my students can tell you that the stuff I focus on teaching them and pushing them on is how to REALLY create depth of knowledge in the simplest of Swings!

Let this be a warning to you. If you're going call yourself a kettlebell instructor or even call yourself a trainer who DARES to use kettlebells, you'd better have a damn solid ability to demonstrate and teach the fundamentals with absolute certainty. For those of you who aren't in the RKC consortium and still dare to teach others to use KBs, don't do it around me unless you're 120% sure of what you're teaching. If I hear of or see you injuring your clients through some p!$$ poor instruction or downright incorrect coaching, you're going to feel professionally like someone beat you on the head with his wok and ran over you with a rickshaw, leaving a pair of chopsticks shoved into a choice orifice.

If you're an RKC and you can't demonstrate the Party Line with absolute certainty, then you'd better approach it with absolute humility. Get with a Team Leader or higher at least once a year and be damn ready to learn... tighten your form, improve your teaching, and master your movements!

The RKC consortium is an evolving clan, and we're pruning some branches now. Some people are freaking out because some of their favorite personalities are demonstrating their inability to evolve, to play with the team, to keep an open mind to the high-quality info that's driving this evolution (like Gray Cook's FMS technologies). Let 'em go!!! Those folks will sink themselves over time, either through overstepping their professional boundaries or by some other faux pas. We, as RKCs, as people who are driven by a true social synergy, are bound and committed to life in Hard Style!

Hard Truth
And as Eddie Murphy said in Delirious during his impression of Uncle Gus... "And if you don't like it, then get the f**k out!"

Am I Really That Intense?

Look at the video & you decide.... I'm having flashbacks of Hungary.

That's what corporate wellness coach Ron Jones, MS, had to say about his experience with the KBLA crew last Sunday.

Read more about his experiences, his insights, and his breakthroughs here: http://coachrj.blogspot.com/2008/06/kettlebells-los-angeles.html
Posted by Unknown at 7:51 PM 2 comments