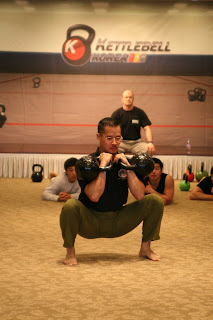 It's a common complaint in the fitness world. You hear individuals complaining that they're too stiff or too inflexible to achieve a certain range of motion. Even coaches & instructors criticize their athletes & students this way as well. Especially in martial arts, where kicking is a priority, this phrase hangs in the air more than Michael Jordan did in his prime.

The first exercise we usually teach in the RKC progression is what's called a "Wall Squat". It's essentially a squat patterning drill that teaches the user how to squat by means of loading the posterior chain (glutes, hamstrings, etc.) without relying on his/her anterior chain (quads).

In many groups, there's always someone who complains that he/she can't squat down because of being "too stiff" or "too tight" in the back, the legs, or wherever. They'll try to squat down, and it'll take an act of God to get their hips down anywhere near their knees.

But if you put those people on their backs and all of the sudden they can bring their knees within a fist distance of their chest, then the root problem ISN'T stiffness. It's WEAKNESS.

When prime movers are allowed to get weak, the stabilizing muscles have to create movement in their place. So the kinetic chain gets flip-flopped.

What does that mean for the squatter?

Simple, instead of using the proper postural muscles to stabilize during the squat, the "stiff" squatter doesn't have the hip strength to pull him/herself down into the squat, trying to achieve the depth by bending forward from the lumbar spine instead... or in some cases by coming forward onto the tiptoes.

There are plenty of ways to rectify this, but perhaps the simplest and quickest way is to practice an assisted squat while working to develop the strength needed for the 3 Prys (see the previous post below).

You'll find that one you can stabilize better, your active range of motion usually increases! For this and more such fixes to your movement problems, check out the technologies in the "Secrets of" series presented by the Functional Movement Systems gang and the Kettlebells from the Ground-Up pack that we put together!
Posted by Unknown at 5:59 AM 4 comments

Knee Pain - How do you bend?

Image from www.urbandictionary.com - Don't even click on that link unless you're prepared to laugh uncontrollably and waste about 2 hours reading that stuff!

During Hard Style Hanguk, one of the participants cautioned me strongly that he wouldn't be able to do much because his knee was injured. I asked him about the mechanism of his injury, and the history he gave me sounded like it had nothing to do with his knee.

What he did say was that after he'd go running, his knee would balloon up and be sore for days afterwards. He also demonstrated very obvious valgus tendencies just as he stood talking to me. The foot on his affected side was rotated externally to 90 degrees from the centerline.

While there are certain pains that are undeniably caused by structural misalignment and shock-based displacement, most such knee pain is simply the result of long-standing faulty movement patterns, as taught by FMS founder, Gray Cook.

Those people who tend to walk with their toes turned outward also tend to allow their knees to collapse inward when they bend. That allows the muscles on the lateral aspect of the leg to get too strong and the muscles on the medial aspect of the leg to get too weak. Some of the external rotators of the hip are also turned off, as the person in question has figured out how to move without engaging those muscles for proper leg stability.

As a result, the connective tissue along the inner part of the knee (near the MCL) gets strained, and the lateral meniscus has to bear more pressure.

I've called it the "3 Prys" and it's one of the teaching tools we use at KBLA.

While squatting down or bending, think of prying 3 parts of your body open simultaneously. The trick here is that you MUST keep your feet flat on the floor the entire time and in strict parallel position. If they rotate, slide, or tilt, start over again! The best thing to do is to train this in bare feet so that the mechanoreceptors of the feet can "hear" the differential pressure information coming from the floor without the muffling effect of cushioned shoes.

1. Pry the knees apart and pick your toes up off the ground. That forces you to load your heels properly while you push your knees outward until they're tracking in the same vertical plane as your feet.

2. Pry your butt backwards & downwards. That, too, forces you to load your heels and engage your posterior chain instead of wallowing in quadricep dominant movement patterns. It also strengthens your lumbar muscles by forcing them to engage in a strong extension pattern.

3. Pry your chest open vertically. Keeping your head pulled upward and your eyes looking forward, squat down with the feeling of lengthening your neck and prying your chest forward. That helps create thoracic spine mobility that you may have lost, as well as adding to the stability in the lumbar region.

If you can't go down very far without losing form, DON'T go any further. Work back & forth in the region in which you get stuck to create the simultaneous mobility and stability needed to re-pattern your squatting movement.

Once you've done that, then go back & revisit the Hard Style Lock. We did this with the guy who was certain that his knee wouldn't hold up during the kettlebell workshop, and he excitedly told us after a 7 hour day of training that his knee no longer bothered him.

You may well find that your chronic knee pain wasn't so unfixable after all!
Posted by Unknown at 6:59 AM 6 comments

Links to this post
Labels: knee injuries, knee pain, secrets of the hip and knee 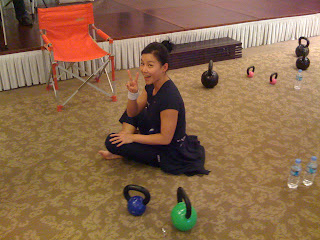 I think I've said it before, but I'll say it again... I can't remember the last time I travelled (for any reason) and found it as invigorating as I did this last trip to Korea.

I've finally downloaded a bunch of pics from my iPhone to my hard drive, so after long delays, now they're going up on this blog. They capture a bunch of the highlights of this trip, so here we go in scrapbook style.

The trip would've never happened if it weren't for Kettlebell Korea CEO Kenneth Lee. You won't find a more unassuming, gentle, incredibly polite, and diligent man in the kettlebell world. We took this picture shortly after he met me at the airport in Seoul as we were waiting for Jon Engum's flight to arrive. I am so honored to call him my "hyung". 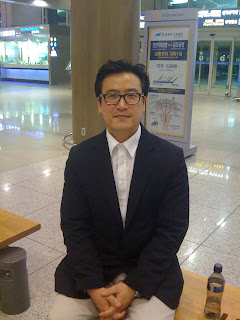 Cindy Kye, PR Manager for JK Golf Conditioning, which is Korea's unparallelled training center for golfers of ALL ages, helped tremendously during the workshop. Because of her previous experience with Gray Cook's work through TPI and having travelled to the US several times before to hear Functional Movement presentations, she really stepped up to help out when the translation was above & beyond the range of the translator on hand. She came into the workshop saying that she hadn't been exercising for quite some time, and we pitilessly made her jump right into the fray. Here she is doing a bottoms-up press with an 8kg KB, an exercise that had obvious benefits for her golfing clientele and one that I used on Michelle Wie with great success. 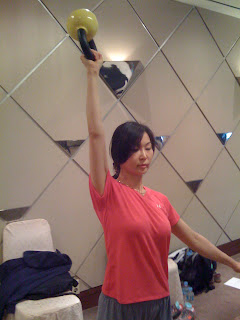 Shin Tanaka, a Japanese national living & working in Seoul as CEO of Access, had taken kettlebell training sessions with several members of the kettlebell community. Yet the feedback he gave me while treating me to breakfast the morning after the workshop was perhaps the most valuable I received. He is another great example of the type of people we got to interact with there - soft spoken, gentle mannered, humble, and diligent beyond compare. I count myself privileged to have met him. 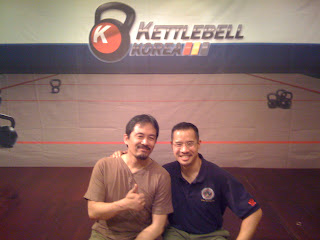 The Olympic Park was something that I was almost ready to ignore, but thankfully Jon didn't let that slide. The Olympic flame, and the Seoul Peace Declaration inscription on the plaque in front of it, filled me with an incredible sense of awe and duty. 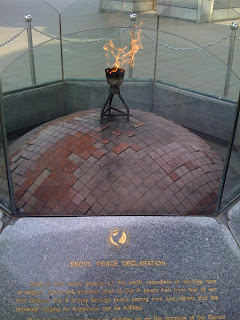 Here's a closeup of the plaque: 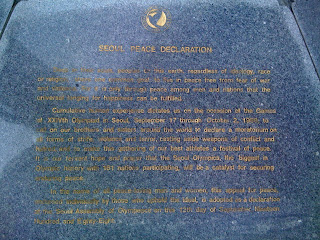 Here's a piece of sculpture from the Olympic Park that Jon pointed out to me that I thought was odd as hell... 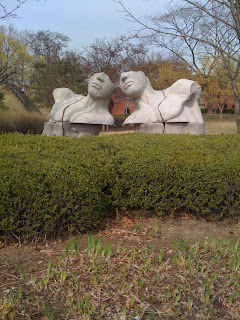 until I read the plaque and was just moved to my soul. 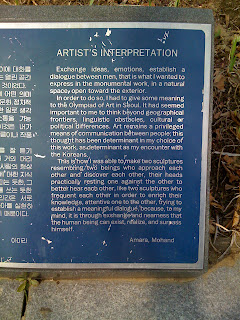 The Olympic Park was full of things like this that give strong examples of how great humanity can be when it wants to be.

And finally, the guy who perhaps left the strongest impression on me was Kim Kyoung-Han, Korean national Judo team member, Asian Games Judo champion, trainer to the stars, and Kettlebell Korea staff member. Despite his formidable resume', Kim's demeanor is quiet, impeccably mannered, diligently disciplined, and generous to a fault. Knowing that I love the throwing arts, he took some time on a lunch break to share one of his favorite combinations with me. His teaching skill became readily apparent, and I thought immediately of featuring him in a full-feature spread in Black Belt Magazine. 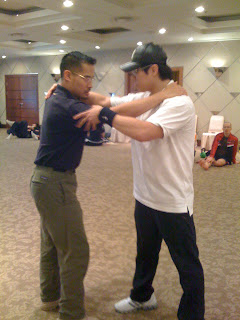 On my last evening in Seoul, I wanted to he made arrangements to meet up with him to leave him a memento of one of the shining stars of American martial arts - a T-shirt from the world famous Inosanto Academy. He, however, completely one-upped me by presenting me with the Judo gi that he won the Asian Games in. 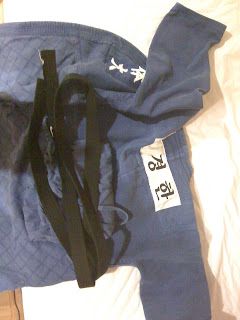 I'm back home now, more determined than ever to evolve into a better instructor, a better athlete, a better physician, and a better man.

To my co-instructor, Sr RKC Jon Engum, thank you for being there with me. I could not have wished for a better friend, guide, and TKD coach to have along with me. The next time, we're bringing the Viking & the Russian!

For the priceless gift of inspiration that came from so many directions, thank you, Korea!
Posted by Unknown at 2:08 AM 6 comments