As has become KBLA tradition, when there's a holiday that honors those who sacrifice in the name of our safety, we follow suit.

I don't need to remind you all of the importance that the men & women in uniform hold to your country, to your society, and to your way of life. If I do, then you might want to pull your head out of the sand.

There are a few individuals whom I've seen poo-poo the efforts of civilians to pay tribute to those who've made the ultimate sacrifice while serving their country. Those individuals might want to perform a serious gut check and take a long look in the mirror before blurting out any more garbage.

This weekend, this Sunday, if you've been on deployment or are currently active duty, come by.
Come train.
Come get the best that the RKC system of strength and kettlebell training has to offer.
And come as our guest.

We salute you.
Posted by Unknown at 7:14 AM 2 comments

Yeah, I know... the Denmark debrief will be posted later. So much to catch up on right now, and still fighting the jetlag. I have no idea how constant travellers like Sifu Dan Inosanto do it.

Here are a couple more pics of the new KBLA long & short sleeve T's fresh from the field of battle in Copenhagen... as well as a pic of me stylin' the new KBLA RKC jacket.

And another pic of Danish Army Sgt. Kevin Lassen with me in the KBLA short sleeve T.

The backs of the shirts have the same logo, but smaller, just underneath the rear neckline URL. It's exactly like what you see on Squealie's shirt below. Remember that the prices have shipping & handling included, so a short sleeve shirt to Europe is just $30 total. These are selling faster than I expected so get yours while they're still in stock!
Posted by Unknown at 5:56 AM 2 comments

We'll get the adult pics posted soon, but these pics of Squealie stylin' the KBLA T-shirt should give you an idea of what we've got. These 100% cotton black shirts are available in short & long sleeve. The adult sized shirts have a large logo on the front and a smaller logo in the upper back, crested by the KBLA URL.

To order, just follow the directions on the drop down menus, and we'll get your gear off to you once I'm back from Denmark. Orders placed between May 10 & May 19 will ship out on May 22.

NOTE: The KBLA RKC gear (such as jackets & dri-weave shirts) is for only those RKCs who train with me regularly. 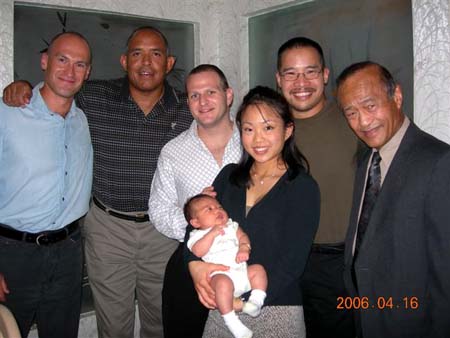 
This post is a little bit of a throwback.

Most of my readers know what kettlebells are and have their own reasons for coming to train with them. But lately, I've frequently found myself having to answer a few questions about why I came to train with kettlebells, so here it is... the most common questions with my straightforward answers. I hope you enjoy.

1. How did you find out about kettlebells?
I first heard about kettlebells sitting in the lobby of the Sports Club/LA with a man I refer to as my white father, Dr. Terry Robinson. Dr. Robinson is one of the pioneers of the physical culture industry, having opened one of the first movie gyms out here in LA, trained stars such as Mario Lanza, and discovered the father of American Kenpo Karate - the late Ed Parker, Sr. His resume is far thicker than that, but that'd take 2 books to cover. Suffice it to say, he's TRULY been there & done that.

I'd head in early in the mornings on Tuesdays & Thursdays to train one of my students and then I'd sit in the lobby with Dr. Robinson afterwards for a while. He talk to me about his thoughts on fitness, training, medicine, and the personalities behind the early years of strength training. He used to always smirk when the trainers would excitedly come in with something they thought was a new invention or discovery and say, "Terry, have you seen this?", and it was something that had been around before their parents were even born.

It was that way with kettlebells too. Even in the 90's, I clearly remember Dr. Robinson showing me pictures of oldtime strongmen training with kettlebells. He said, "Watch, these'll make a comeback, too!"

Fast forward a decade, and I'm finishing up an treatment with former Ed Parker student, Dan Inosanto (more well known as the star pupil of the late Bruce Lee). Concerned that he might overtrain or re-injure his back, Guro Inosanto asks me if I'd observe a weight training session that one of his students set up for him.

I go to his Academy the next week and meet Pavel Tsatsouline. The rest, thanks to God and Guro Inosanto, has been history in the making.

2. What is it about kettlebells that attracted you to them initally?
Honestly, nothing. Not a damn thing.

I've hated weight training my entire life up to the point when I met Pavel. There was never a weight training device or method or coach that I'd trained with and really felt like I was doing something that was truly good for my body... aside from mere bodysculpting. I'd always felt some sort of pain the next day that was above and beyond the usual "I just worked out hard" sort of feeling. I'd also seen plenty of guys in the weightstacks moving around like they were in the early stages of being cripples. So in my mind, I'd equated weight training with injury. And even when I first saw kettlebells up close & personal, I had no reason to think they'd be any different.

3. What changed your mind?
Pavel.

Pavel Tsatsouline's method of training is absolutely singular. Nothing I've ever seen out there compares to it. As soon as I heard him open his mouth while teaching Dan Inosanto, I knew he was heading in a direction that was dramatically different from the rest of the pack.

Instead of having Inosanto dive right into tons & tons of reps with some random weight, the first thing Pavel had him working on was a Wall Squat - a sophisticated mobility/stability exercise - to pry mobility into his spine and strength into his hips. Mobility first!

As I listened to Pavel talk about Dr. Vladimir Janda, the posterior chain, the weakness of the glutes, and hip flexor tightness as the root cause for a GREAT DEAL of lower back pain, I realized that I was in the presence of no ordinary trainer. This man was taking my understanding of clinical medicine and turning it on its ear!

The more I listened, the more captivated I became, until finally, after adequate goading from Sifu Inosanto & Professor Roy Harris, who had also begun training with Pavel, I joined in.

4. So what were some of the "benefits" you experienced from kettlebell training?
There are 3 main benefits that I experienced very quickly. I'm sure there are more if I stop to think about it, but these are the ones that stand out the most in my head.
- Lower back pain DRAMATICALLY reduced thanks to Pavel repatterning my lower back and hip movement with "Hard Style" methods
- Shoulder/neck/arm pain & weakness RESOLVED (when almost every other form of treatment short of surgery failed) thanks to ONE exercise - the Turkish Get-Up,
- Lost 20 lbs. thanks to the metabolic repackaging from Hard Style.

Let me clarify for a moment here. "Hard Style" doesn't mean hard in the sense of having to endure bitter hard training, but rather "hard" in the sense of employing selective tension in the body to dramatically increase strength and improve performance without having to bulk up.

As a clinician myself, the first two were enough to knock my socks off. Losing flab and toning up were just icing on the cake.

5. AWESOME! There are kettlebells at my gym now, so I'm gonna ask my trainer to show me some stuff!
You COULD do that, but I have to, as Gray Cook would say, "smack a beehive with a canoe paddle" and tell you that there are far too many trainers out there who think they know what they're doing with kettlebells and actually couldn't tell you the difference between their forehead and their backside in those regards.

Case in point... A well known athlete came to me a couple of years ago with his well-paid trainer in tow and complained that kettlebells were hurting his back. His well-paid trainer came up to me, puffed out his chest, and started doing what he THOUGHT was a kettlebell swing. I had him drop the bell and told the athlete point blank, "No wonder your back was hurting you."

The trainer was demonstrating something hunched over, hardly rooted to the ground, and lacking any semblance of hip extension, posture, or kinetic linkage. I had the trainer sit on the sidelines as I dissected his client's technique and took him from tenuously working with a 35lb kettlebell to confidently and powerfully swinging a 70lb kettlebell, and then swinging TWO 53lb kettlebells.

While it might not've been to coolest thing to do, I kept asking the athlete, "So how's your back doing swinging those HEAVY, HEAVY kettlebells?" Every time he answered that his back was fine, I kept looking over at the trainer and cocked my eyebrow to rub it in a little more.

The kettlebell is a tool. The tool isn't nearly as important as the method that you use to employ the tool to meet your goals. It's like a knife. If you really know how to use a knife in its broadest application, you can basically handle everything from surgery to shaving to sushi to self-defense. If you are clueless and don't respect the knife, you'll probably cut yourself or someone else thinking you know what you're doing.

So while I'm glad that you're enthusiastic about kettlebell training, I think the more important thing is to find someone qualified to teach you. How do you know who's most qualified? Check the list of RKC certified instructors. While some are undoubtedly better than others, this group represents the gold standard in training and qualifications.

Hope this post was somewhat entertaining & informative. I look forward to seeing some of you in Denmark on the 14th and some others in Minneapolis on the 28th!
Posted by Unknown at 7:11 AM 3 comments