The last few days, since making my new YouTube channel more active, I've been getting more messages from people asking for what reference material I have available.

Admittedly, I'm THE WORST when it comes to remembering what I've done. I'm always looking forward to the next multimedia project that I need to prepare for, thinking of the next workshop I need to pack for, and constantly struggling to steal minutes here & there to better my own understanding of the material that I love (which is also what I teach).

So this morning, before spending some training time with Squealie & hopefully bolting out the door to steal some time learning from Martin Wheeler, I tried to put down the most complete list of training, rehab, & educational references that I've been part of to date.

This program, that I put together in cooperation with Beachbody, the producers of P90X & Insanity, is the first program in their catalog that emphasized quality of movement over quantity. Instead of a "Fit Test", Tai Cheng starts with a "Function Test". Throughout the entirety of the program, movements are taught in a very precise, step-by-step fashion, leaving nothing to guesswork. Even the footwork patterns are done on a grid, allowing you to double check at every step along the way.

Additionally, I also worked in 4 basic foam rolling progressions and many of the strength, flexibility, and breathing exercises that are part & parcel of old-school Tai Chi as I was taught by my father & other masters.

Instead of trying to come up with my own style of Tai Chi, I wanted to break down the first section of the Yang style Tai Chi large frame long form in a manner that would be digestible to western audiences who were more attuned to high-intensity interval training (HIIT) and Tabata protocols. So while Carl Daikeler wanted to name the program Tai Cheng with the Cheng referring to my last name (鄭), I named the program after one of the most important achievements (also Romanized as "Cheng", but written as 成) - health.

Next up is the Kettlebells from the Ground Up DVD series 1 & 2, which was fathered by my mentor, Gray Cook. Gray & Brett Jones appear in the first DVD, while I authored the manual. Brett, Jeff O'Connor, & I appear in the second part of the series - The Advanced Progressions. In these DVDs, we cover the Turkish Get-Up inside out, upside down, and from every possible angle that you can think of, dispelling some of the myths behind the exercise, and giving you the peelbacks that allow you to get more benefits out of the exercise with less risk.

I've also done the Kettlebell Warrior with DragonDoor. While this footage didn't hit the market until waaaaaaaaaaaaaaaaaaaaaaaaaaay after it was shot and some of the information in there was rather dated, it's still got some of my better teaching cues for the fundamental RKC/StrongFirst kettlebell lifts and shows the carryover for martial artist & combat sports.

Also, there was the Kettlebell Rehab presentation that Doug Nepodal & I did a few years ago for IDEA Health & Fitness Association at their Los Angeles convention. We took the two fundamental lifts of Pavel Tsatsouline's Program Minimum and taught them in great detail, tying in rehab principles along the way.

There are also a few podcasts that I've done for MovementLectures.com which are available for download. Some of those also feature my brother/colleague, Dr. Jimmy Yuan. Simply go to the MovementLectures.com site & type in Cheng in the search field to find some of the talks & podcast lectures that I've been honored to be part of.

I'm sure that I'm forgetting something, and hopefully folks who've recalled some other resources that I've been part of will chime in on the comments below. In the meantime, I hope this off-the-top-of-my-head list will steer you towards some material that will do you & your clientele/patients a world of good.
Posted by Unknown at 9:46 AM 1 comments

Yes, I know I haven't blogged in ages, and I promise that I'm getting back on the wagon with this. ;-) But considering that yesterday was the 238th birthday of the United States Marine Corps, and today is Veterans' Day, I wanted to share a particular experience with you.

Over the years, I've been blessed to meet & work with a lot of really cool people. If you've followed me on Facebook or Twitter or Instagram, you have an idea of what I'm talking about. It's a crazy life for the child of immigrant Chinese from rural Delaware, and there's hardly a day that goes by that I don't shake my head in wonder, tripping out on how life has turned out for me.

Thanks to one of my dear friends, I was fortunate enough to bring my son to meet Gov. Arnold Schwarzenegger at the unveiling of his latest Muscle & Fitness cover on Venice's legendary Muscle Beach. 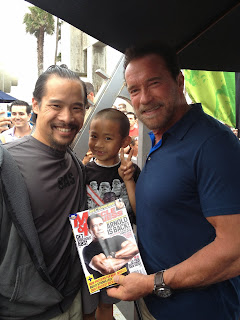 While we were waiting in line, there was a young Marine standing right behind us who'd just come back from deployment. I spoke with the young man about his experiences overseas, and he was telling us that meeting Arnold was one of the most momentous experiences of his life. He went on to talk about how Schwarzenegger's story motivated him and inspired him through some of the most difficult parts of his tour of duty. Holding an older digital camera, the young Marine asked if I'd take a picture for him when he got to meet Arnold, to which I gladly agreed.

When Squealie & I had just finished taking the pic above, the Fire Marshall and crowd control quickly shooed us out. I looked back at the young Marine with regret & disappointment at not being able to take the picture for him.

I'd found out later that thanks to Gov. Schwarzenegger's right hand man, Daniel Ketchell, the young Marine was indeed able to meet his hero and snap a pic with him... much to my relief. While that certainly put a smile on my face, Ketchell later told me that Schwarzenegger then took the time to handwrite a note of personal thanks to the young Marine in appreciation for his service to our country.

That left tears of pride and joy streaming down my cheeks.

Veterans, you are the front line of a fight that makes our way of life possible. As I count my family's blessing on a daily basis, I count you among them.
Posted by Unknown at 9:23 PM 0 comments