If you ever wanted to see, feel, and learn Gray Cook's FMS screen and Pavel Tsatsouline's Hard Style kettlebell training method and you live between Orange County and San Diego, here's your best, easiest, and cheapest opportunity!

*Has pain been pissing you off?
*Has your training plateaued?
*Do you want more out of your life, your training, your movement, and your quality of life?

I'll PERSONALLY be teaching down in San Clemente next weekend at the elite studio of Valerie Waldron, RKC. We've extended an early bird discount (just $50) until Monday, August 2, just before midnight. After then, the price goes up to $75... still a steal for 4 hours of some of the most mindblowing training you're sure to get.

For the USMC stationed at Camp Pendleton, it'll stay at $50 regardless of when you register. Please use THIS link - https://www.paypal.com/cgi-bin/webscr?cmd=_s-xclick&hosted_button_id=B2JJ8XAY2CPDS

If you're with USMC 1st ANGLICO, e-mail me directly at kettlebellsla@yahoo.com for an even better registration special.

Some of the concepts we will cover are:


- Foot mechanics: Is your foot killing the rest of your body?

- Hip mobility: The hip is a bad neighbor!

- The Hard Style Lock: The importance of tactile cueing in effective instruction

- Breath & the Neck: The gateway to internal work and external structure

- Primitive Patterns: I've fallen & I can't get up!

- Half-Kneeling & Back Pain: Are your Quads punishing your back?

SEE YOU THERE!
Posted by Unknown at 4:31 PM 0 comments

It's been a while since I've had a chance to blog about little more than letting you know that I'm in or out of town or announcing some other random developments in the RKC or FMS worlds.

For some reason, there's a whole slew of people that think that as long as they buy the next cool tool or shiny, new toy, they'll get better performance out of their bodies....as if simply having the new kettlebell or TRX technology under your roof will osmotically make you a better athlete or decrease your pain or help you lose the stubborn fat around your midsection... as if simply buying the highest quality nutritional supplements like Shakeology without regularly using them will dramatically transform your state of health.

WHO ARE YOU KIDDING OTHER THAN YOURSELF?

Higher reps with heavier weight DOES NOT necessarily mean that you're moving better.

And now for the smasher...

Moving without pain DOES NOT necesssarily mean that you're moving better either!

Moving WELL, with biomechanically advantageous patterns REFLEXIVELY and without pain, means that you're moving better. Once you've established that as your BASELINE, then adding sets & reps makes for a better, stronger, more sound body.

That said, what's one of the easiest ways for you to trash your body (aside from picking a fight with an angry Beast)?

Let's make it an even easier question. Suppose the human body's like a car (not that I know jack$h!t about cars). Let's think of what we might do to destroy a car without actually crashing it into something deliberately. There are 2 main ways of destroying a car in a non-contact fashion:

1. operating the car when the fluid levels are far too low, or
2. driving the car too rough when there is some mechanical impediment.

Operating the car when the fluid levels are too low is an obvious one. Start driving in a car without brake fluid, with a leaking radiator, or without sufficient motor oil. Breakdown is imminent. It's not a question of if, but when the car will seize up either in rush hour traffic, or while you're speeding down the interstate. 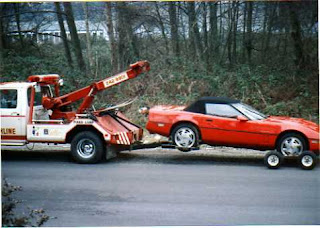 No, that ain't my car!
Driving the car with a mechanical impediment goes back to what Pavel calls "driving with the parking brake on". I think we've all done it at some point or another, but the hard part is to realize BEFORE we put the car into drive that the brake is still on. For some of us, that takes a long time. We fumble about with recurrent injuries that seem to get better and then get reaggravated.

The lower back is a common site of pain, injury, reinjury, and eventually debility for some. Now while it's easy to focus on alleviating the pain at its most painful location, the "brakes" might still be locked down elsewhere in the vehicle.

There are many ways of approaching the hip dysfunction, which is paining the lower back.
1. You can stretch or treat the living hell out of the lower back in an attempt to "decompress" and restore range of motion. This is focusing on mobility at the site of pain.
2. You can do crunches and ab exercises until the cows come home in order to create more stability for the lumbar spine.
3. Or you can try to power your way through to hip extension by clenching your glutes so hard that even Jean-Claude Van Damme would be jealous. 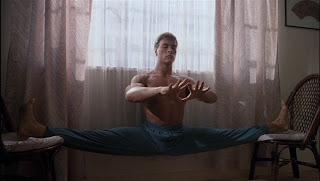 Looks like pretty mobile hips to me, but what are we missing?
Gray Cook's mantra has always been to focus on mobility FIRST. But sometimes, trying to pry movement out of a stuck joint without taking the brakes off first is easier said than done.

The trick is sometimes to encourage the reflexive action of the weakened "accelerator" muscles while simultaneously training the hyperactive "parking brake" muscles to turn off. In this case, that would mean strengthening hip extensors, such as the glutes, while stretching hip flexors, such as the psoas, iliacus, and rectus femoris.

Pavel's long been too kind in complementing me publicly on my form with the Front Squat, and it's something I never really paid attention to until after he had me demonstrating some sort of horse stance drill at the Feb 2010 RKC II. I couldn't appreciate the drill at the time, and I'm still investigating its worth from a movement quality standpoint, but the Boss's comments still made me question what I'd been missing.

While teaching the RKC Squat back here in Los Angeles, I felt like my own form wasn't the same as what it was when I first started training with kettlebells. Keeping in mind the most common mistakes in the Front Squat (i.e., lumbar flexion, valgus collapse, etc.), I started looking at ways of optimizing necessary attributes for this particular movement pattern.

What I came up with revolved around this... 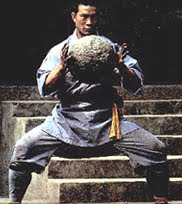 Yup... old-school Shaolin & Tai-Chi stance training. Just as with any field of endeavor, there are tons of ways to execute/perform anything. Sure, there are plenty of different versions of the horse stance floating around, and in my own martial arts studies, I've seen, learned, and taught more than one variation myself. But this isn't the time or place to get dogmatic, especially if you're not clear on context.

The earliest version of the horse stance that my father taught me revolved around achieving vertical alignment from the midfoot, the hip, the shoulder, and the center of the head when viewed from the side. When viewed from the front, this stance was referred to in Cantonese as "sei ping ma bo", meaning "four levels horse stance". The four levels referred to 4 perpendicular lines, as formed by the two lines from the knees to feet, and the lines from knee-to-knee & foot-to-foot.

To perform this stance correctly, the aforementioned alignments of leg and of spine must be achieved and maintained. But to achieve these alignments requires simultaneous mobility of the anterior portion of the hip joint with stability coming from the drive of the glutes in the posterior chain. Instead of doing the movement in strict Shaolin format, I took a modified version of it and drilled my students on it one Sunday morning.

Without exception, each one of them was shaking, sweating, and swearing while I had them perform very subtle movements, adjusting them slowly, yet thoroughly into the essential points of the stance. But at the finish of the exercise, everyone reported not only better hip mobility, but also a marked decrease in lower back stiffness.

Just as a knot is only as useful as it is secure under pressure and moveable enough to untie when offloading, the lumbar spine and hips must also be able to reflexively stabilize under load while able to move under load to create powerful movement. With the hip flexors and quads unbound enough to take the parking brakes off while the posterior chain keeps driving the pelvis forward, the entire spine can remain in neutral under a relaxed neck and a tall chest.

Wanna see & experience more of this and other correctives in high-detail? Get to Hard Style Ventura in November! In the meantime, read & re-read this post for the little details that can make or break your hips & back!
Posted by Unknown at 2:42 PM 6 comments