This started out as a blogpost that I began over a month ago, but as one of my business consultants said to me this morning, "Lots of good stuff you have gets lost when you're one of those guys who has to keep too many plates spinning."

But this is an important topic that I didn't want to let slide. There are so many thoughts that pop into my head for blogging & writing & recording & podcasting that I really need to have a dedicated multimedia assistant working with me on a regular basis to get more of this $h!# out to you on a more regular basis. I understand that this is an issue for me, and I'm working as best I can on creating a change in processes that will streamline the flow of what will hopefully be useful information out to you. And I really need to thank each & every one of you that's been dropping me messages of encouragement, offering your expertise & help, and sharing my posts all over Facebook, Twitter, and the rest of the web.

You inspire me..... and because of that, I want to leave you with this bit of inspiration as we head into the Holiday season. [EDIT: Yes, I started writing this well before the holidays.]

More than a month ago, one of my dear friends, Jason Ferruggia posted an awesome tweet that I hold VERY close to my heart.


“Endure the pain of discipline or suffer the pain of regret.” You choose.
— Jason Ferruggia (@JasonFerruggia) November 2, 2014

For far too many who read that sentence, the words "pain", "discipline", and "regret", are the ones that stand out, so the reflexive interpretation in American society is that even if you have pain, you need to show discipline by not quitting. Otherwise, you'll regret it. Unfortunately, I think there's been a myopic view of that sentence that has damned countless athletes and injured no shortage of children.

Some folks have adopted the mindset that 'not quitting" means not changing anything and just putting more effort in, even when it's causing you pain or hampering your performance. In those situations, people have mistaken stubbornness for discipline, and I've seen that well-meaning but critical error victimize everyone from youth athletes to rehab patients.

Let's define "consistency" as "dedication to a pursuit".

Your pursuit can be an athletic goal, such as placing in a Brazilian Jiu-Jitsu (BJJ) championship, winning a team trophy like the Stanley Cup in hockey, or even something as simple as being able to make it through your wife's salsa class without fatigue or physical pain... because the mental anguish is out of my field of expertise ;-).

Your pursuit could be a medical one, such as surviving cancer, reintegrating smoothly into civilian society after a particularly harrowing deployment, or getting back on the mat after ACL reconstruction.

Your pursuit could be a social one, such as learning how to take criticism without getting defensive, overcoming paralyzing shyness, or becoming comfortable with public speaking.

Regardless of the pursuit itself, we need to be clear about 3 things:


Once we're clear on those, let me just pick one goal in particular in the interest of time... say, conquering a strength training goal, like a PR (personal record) military press.

1) You work hard & consistently every day to increase your press training volume (number of reps). You don't miss days on your program and don't give excuses. You're the ideal athlete and you steadily increase your loads and your performance.... OR you skip days every now & then and decide that you'll just pile on more reps and "go harder" the next time you train to "make up" for your inconsistency.

2) As you work on improving your press, you plateau out at a weight that's less than your goal regardless of your level of consistency (or inconsistency).

HERE, where the honesty counts, is where lots of people are made or broken. In this case, you can either, seek out where your form was suboptimal, forcing you to struggle harder than you needed to and likely steering you towards injury, OR you could just stubbornly drive through even harder with more mental dedication in spite of physical deterioration.

The second of the 2 choices MAY get you to your result, but it won't be sustainable. Your pursuit of that PR press may have forced your rotator cuff, scalenes, and other structures into such profound compensation that you injured yourself badly enough to need a surgical intervention for the numbness, weakness, and/or pain that your arm is now experiencing.

3) When you realize that your performance has plateaued and you can't improve any further on your own, seeking out the guidance of a true expert (and actually taking their advice) can make all the difference in the world.

Let's say that you seek out a world-class physical therapist (like Dr. Ann Wendell or Dr. Charlie Weingroff) to help you clear up what's causing you the pain, and let's say that they advise you that there are some neck and thoracic spine issues, along with some trigger points, that need clearing up. You're told to stay off loaded overhead lifts (get-ups, presses, snatches, jerks, and even pull-ups) until you've demonstrated an effortless, pain-free range of motion unloaded.

You can either adhere to their advice, put your favorite lift on the sideline for now, go through their prescribed treatment protocols, and troubleshoot all of the dysfunctional movement patterns that were sabotaging your lift in the first place and move past your plateau... OR, since you second guess the experts you sought out, you can still continue to train your press because you might be 3 months away from something like your StrongFirst SFG Level 1 certification, and you're afraid that not pressing will make you weak.

In the latter case, you're being dishonest with yourself and with the person you sought out for guidance and help. And as a result, you just might manage to make it through whatever athletic event you're training for, but you'll be injured for a long time afterwards. Instead of being the picture of strength and embodiment of the ideals you're trying to teach your fitness clients, you'll be the picture of a dumb jock or jock-ette who didn't listen to the professionals who were trying to teach you how to avoid that injury in the first place. What's worse is that you'll likely turn into one of those washed up athletes-turned-coaches who does nothing but sell dreams of his/her glory days to unsuspecting clients who'll likely be injured trying to follow the same methods you used.

See, what most people fail to understand in the over-glorified worlds of sports, athleticism, fitness, and even work is that oftentimes less is more if you have the right priorities. So when Jason Ferruggia posts that you need to endure the pain of discipline, that discipline, when you're not getting the results you want, sometimes takes the form of having the self-control of pulling yourself back enough to take a different approach to the same goal.

Gray Cook often shares his vignette about taking professional football players off of the squat rack and having them focus on individualized corrective exercise progressions until their Functional Movement Screen scores are "2s on everything with no asymmetries or pain" for months. When these world-class athletes return to their usual strength and conditioning workouts, they're often shocked to see that they not only didn't lose strength, but oftentimes increase their max lifts. The key here is that they had the discipline to follow directions and not just do more of the same.

Einstein has been well-quoted as saying that insanity is doing the same thing over & over and expecting a different result. Now while that term has been used to brand a workout routine, let's not get it twisted. If you're not getting past the plateaus or the pain that's in your way, it's time to reassess your strategy, your honesty, and your discipline. Regret is a poison that never leaves your soul, so make sure you deal with the factors that contribute to it! 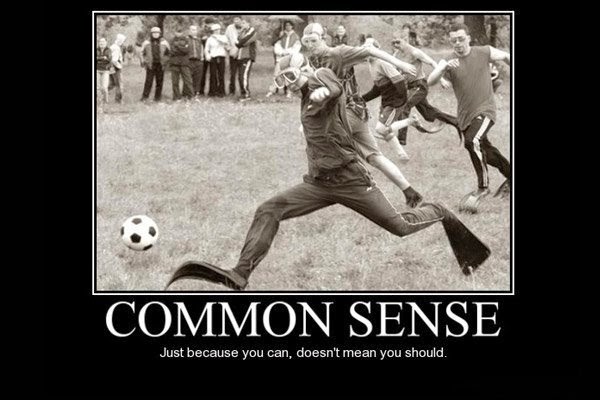