A system of training that progresses from very thoroughly developing systemic mobility, to spinal alignment, to breathing, to foot/leg/hip power, to leg-waist-spine-arm coordination, to foot-leg-waist-spine-arm sensitivity & responsiveness.

It is a system that both prehabilitates and rehabilitates. There are no shortage of populations (from the feeble to the fighters) worldwide that have benefitted from its practice, its study, its total application.

Sound like Hardstyle with the FMS fusion? It is.

Know what else it is? Yang style Tai-Chi.

Just like Fast & Loose, there's a heavy emphasis on not just creating muscle relaxation, but maximizing it! Just like Super Joints and Relax Into Stretch, there's a fundamental emphasis on maximizing powerful, effortless range of motion. Just like the RKC principles, there's a solid dedication to developing a strong, powerful base from the waist down in order to be able to most efficiently utilize the upper body to issue power.

My father first introduced me to Tai-Chi when I was 10 years old. He studied a Yang style Tai-Chi derivative from one of Prof. Cheng Man-Ching's students, named Master Chao. [For those of you who are unfamiliar with Prof. Cheng Man-Ching, his writings on Tai-Chi, Chinese culture, martial arts, and human development are extraordinary. I've included a link to a compilation of his writings below.]


I remember watching the slow-motion movements one morning and trying in vain to stifle my laughter. As a youth, I was more visually familiar with the hard-fast, bone crunching power that karate or "external" kung-fu systems demonstrated. So seeing him move in what seemed like ridiculously slow motion was utter hilarity to me at the time.

Knowing the mind of his son, my father stopped training and confidently asked me to punch him in the face as hard as I could. With a challenge like that, almost no boy will back down, and I shot a fist out with all I had. What happened next blew my mind.

Without using rigid force, he deflected my fist without blocking, keeping the muscles of his arm and shoulder very relaxed. When I thought I was sure to make contact with his face, I instead fell forward off balance into an upward armbar and then was launched across the room.

"COOL!"
That was almost 30 years ago.
After that, I was hooked. I learned all that my father had to teach me about Tai-Chi until I headed out to LA for college. Shortly after arriving in Pasadena, I was fortunate enough to meet and train under Prof. Daniel K. Lee, a former Bruce Lee student who was also one of North America's preeminent Yang style instructors. I've had a few other influences since then, but my father & Prof. Lee were my two main teachers in that system of martial arts.

Fast forward to the present....


Working on rehabilitative issues & strength challenges that I've been trying to overcome, I keep coming back to the ideas of "best training methods" and optimization. My mentor, Gray Cook, speaks volumes about "authentic movement", and the more I research his teachings, the more I keep getting drawn back to my original martial arts training with my father and my earliest Sifus (masters).

The countless hours of Shaolin & Tai-Chi training that I'd received in my teens and twenties set the stage for my body to be able to achieve what it did in more recent years. However, I'd lost sight of that. I'd lost sight of the deep relaxation practices that had kept me healthier, the incredible joint mobility routines that had kept me agile & flexible, and the incredible movement patterning drills that had made me function, flow, fight, and feel like an animal.

Don't get me wrong.

RKC style training did a LOT to improve my functionality, but I've been beating my head against a brick wall lately. The FMS principles kept pointing me towards something different than what I was doing (which was trying to improve my Press by just working my Press MORE), but I wasn't completely sure about what I was looking for or how to achieve a change in my state of being & performance. I did know that emotionally & spiritually, I sorely missed martial arts training.

So a few weeks back into more focused martial arts training, I went back to revisit the kettlebells. For the first time in months, the right shoulder didn't hurt with a 24kg kettlebell strict military press. I didn't do many reps or push the load past the 24kg mark, but simply being able to move that weight without having to wince or grit my teeth was a major improvement.

Additionally, I'd been spending more time on getting treatment (soft tissue & joint mobilization) as well as working on corrective exercise patterns. The areas that seemed to need the greatest focus and yielded the greatest improvements were those that seemed to point me straight back to traditional martial arts stance & flexibility training. 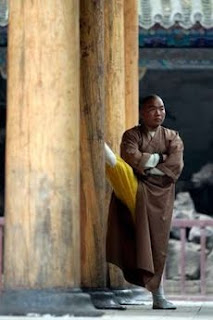 One of the biggest insights I've had lately revolved around the Yang style "front stance". The proper hip positioning for this fundamental stance, in conjunction with the proper weight distribution & spinal alignment, is essentially the same as the FMS half-kneeling corrective position.
The Tai-Chi & Chi Kung breathing progressions I learned from my father almost 30 years ago are essentially the same as those that I'm learning from Gray Cook, Brett Jones, & Dr. Lee Burton as far as crocodile breath patterns for neurological resets.
What does this all mean? Is the old-school Chinese martial arts training better than the FMS or the RKC methods?
To quote one of my most beloved mentors, Prof. Roy Harris, the real answer is "It depends"...... depends on your goals, depends on what you're coming to the table with, and depends on the timeline and means you favor to achieve your goals.
For me, the traditional martial arts of ancient times & the modern RKC-FMS marriage that is the CK-FMS system fit together like a hand in a glove. It's not a question of which one is better than the other. It's knowing how to use approaches from both that will give me (or my clients) the best possible results at any given moment, depending on the pre-existing conditions. At this juncture in time, restoring my combat skills abilities while simultaneously improving my functional/fundamental movement patterns is at the top of my list. And traditional martial arts training is what's helping me get there fastest.
Would it be easy to go back to focusing my training on strength with kettlebells?  Absolutely. But the better question would be, "Would it be intelligent for me to focus on weight training of ANY sort at this time with my movement screens looking the way they are now?"
Remember that ANY tool is good or bad only in the sense that it's either appropriate or inappropriate for use in a particular context. And sometimes, we already have the tools we need right in front of us. We just need the occasional reminder from something "new" to teach us how to appreciate something "familiar" in a new light!
Posted by Unknown at 12:46 PM

Are the Saturday morning classes in Santa Monica still occurring, and would they be suitable for a rank beginner?

The Santa Monica class at Clover Park is still occurring, but I'd sign up for the Yahoo mailing group to make sure you get the scoop on any class cancellations/rescheduling. Everyone comes in as a rank beginner, and now would actually be the BEST time since we're focusing on a method of learning & training that is perfect for total beginners.

Sir, thank you for your kind words and deep insights. Your leadership is a MAJOR part of what keeps the RKC moving forward and our field improving!

Enjoyed your post. I've just had about the last 3 or four years where I've been focusing more on flexibility and sensitivity, particularly in my yoga practice. I'm just now getting back into strength and am looking at taking the RKC in korea in november. I find that now that I have a pretty good sense of body awareness I'm actually looking forward to getting back into strength training. I think now I'll be able to do the strength work with more awareness rather than less, I'll hopefully work towards being sensitive and strong at the same time. I think there is a balance between the two, just the right amount of tension to get the job done while still being able to be sensitive or aware.
Anyway, looking forward to november.

I've just had about the last 3 or four years where I've been focusing more on flexibility and sensitivity, particularly in my yoga practice.

I'm just now getting back into strength and am looking at taking the RKC in korea in november.

I find that now that I have a pretty good sense of body awareness and work at keeping that awareness while doing strength training. I'll hopefully work towards being sensitive and strong at the same time.

I think there is a balance between the two, just the right amount of tension to get the job done while still being able to be sensitive or aware.